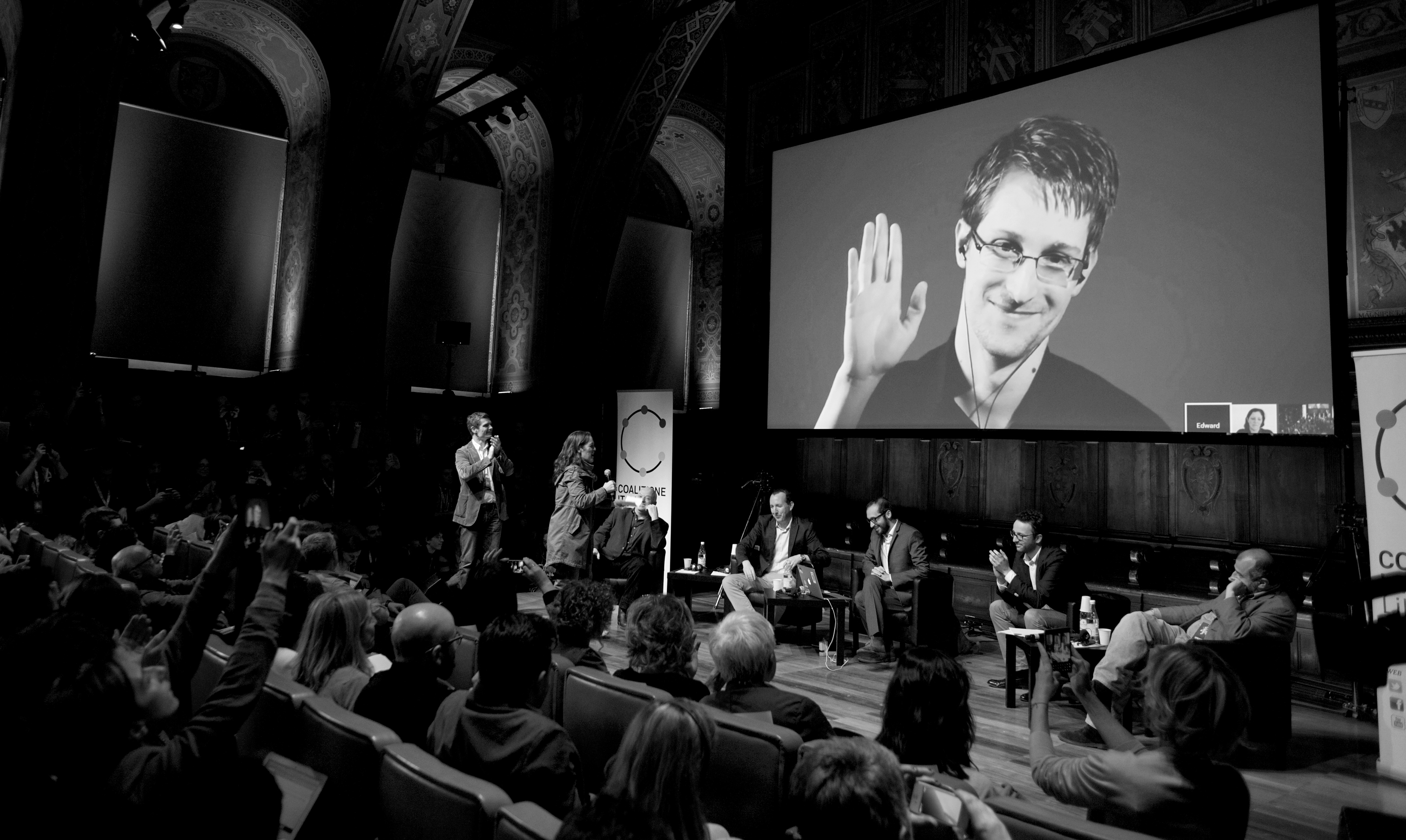 Our Coalition was proud to bring to the International Journalism Festival its most eagerly awaited guest, Edward Snowden, who spoke at a panel which thrilled the entire community of journalists.

In order to fight mass surveillance, civil society needs to reach a higher level of awareness of its own strength, said the thirty-one-year-old security expert, who currently resides in Russia where he has found asylum.

Edward Snowden has not tired of repeating that governments exert total control over every kind of information about every single citizen, which is collected by agencies such as the NSA in a constant, endless stream of data that regards our private lives.

At the panel, Snowden also mentioned a somewhat novel approach that governments have been adopting: they claim that by collecting all data non-stop, they are not violating citizens’ privacy until they actually look through them. What they don’t tell you, Snowden explained, is that these algorithms and systems are already analysing and cataloguing the data as they collect them. “Today, without any human looking at it whatsoever, you have already been flagged by the system,” he said, adding that this was “the largest system for oppression in the history of mankind.”

Fabio Chiusi, who hosted the panel, is a journalist and author who has often being critical of governments with regards to surveillance.

He recalled having tried several times to ask Matteo Renzi and other Italian ministers what they thought about the Snowden revelations, always to no avail.

If our politicians seem to want to ignore the issue, civil society must not. Chiusi then asked Snowden to explain why this was an important issue for Italians, too.

The former CIA employee said that governments and spy agencies routinely work together quite closely. What governments are guilty of is sharing information on citizens with other States, often with no oversight.

It is important, therefore, that government officials answer these questions, and when they do not, civil society should hold them accountable.

Snowden also reminded us that, even if the policies of our country are less invasive than others, this does not necessarily mean that we are safe from surveillance by other States, including our allies.

Technologies are changing the balance of power between the citizens and the State.

Are we ready to face the consequences?

How can we protect ourselves? Advice from Snowden, Laura Poitras and Ben Wizner

To ignore this issue as though it did not concern us would be tantamount to handing our data and our privacy over to the governments, said Snowden and was backed up by Laura Poitras, director of the Academy Award-winning documentary Citizenfour on the Snowden revelations, who joined the panel via video.

When asked what the best ways to protect ourselves were, both the whistleblower and the filmmaker stressed the importance of encryption and anonymising. Even though they are not 100% secure, they are still the best currently available options.

Governments, however, know that more and more people are using encryption, and are putting pressure on companies to hand over encryption keys. More and more often, secret agencies try to steal the keys, Snowden said. Ben Wizner, Snowden’s attorney and director of the American Civil Liberties Union’s Project on Speech, Privacy and Technology, agreed from the stage in Perugia.

Governments, he added, fear their public, they fear citizens rising up, people rioting in the streets and electoral backlash.

On the contrary, “a mass surveilled society is a weaker society, […] making the citizens much more vulnerable,” Andrea Menapace, director of CILD, remarked.

This kind of reciprocal control leads to instability for both governments and citizens.

According to Snowden, this is exactly what has been happening in Europe after the Charlie Hebdo massacre: governments have reacted with more surveillance, exploiting fear and insecurity.

And yet, as the attacks in France, Denmark and other countries have demonstrated, all of these laws cost us liberties, but do not increase our safety.

Actually, Snowden concluded, these programmes have never made a concrete difference in a single terrorist investigation or stopped a single terrorist attack: are we really going to give up our freedom in exchange for this kind of safety?

Ultimately, he said, “Even if they did make us safe by some margin, it doesn’t matter if we are perfectly safe, if we are not at all free.”
[Black and white photograph by Alessio Jacona]