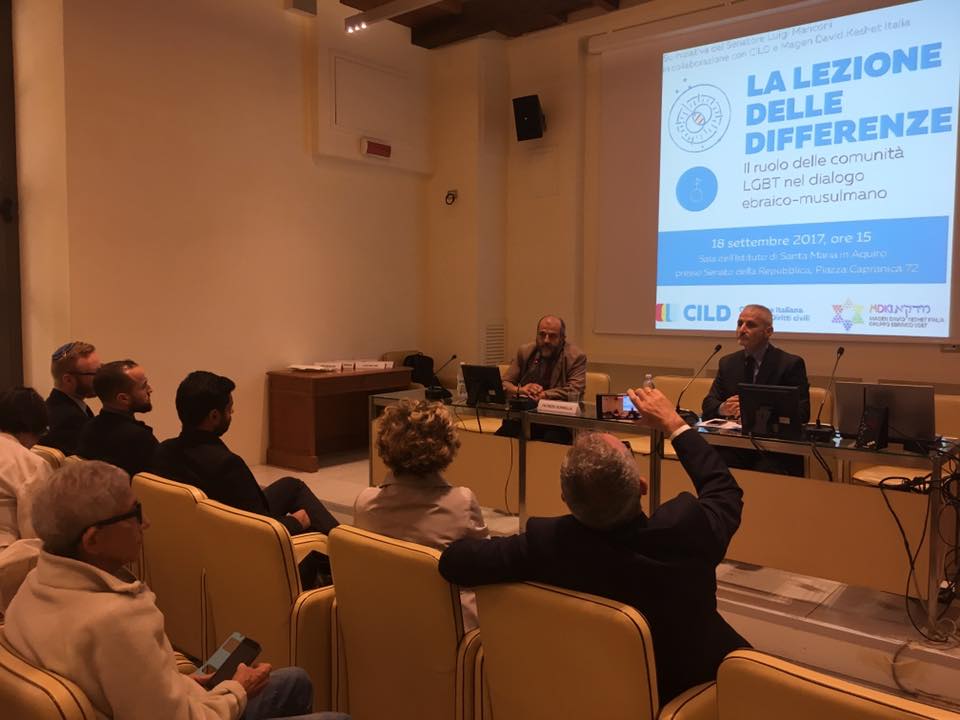 Is it possible to start with the LGBT community to supplement Jewish-Muslim dialogue? The conference ‘The lesson on differences: the role of the LGBT community in Jewish-Muslim dialogue’, organised by CILD and LGBT Magen David Keshet Italy, takes this question as its point of departure. The initiative took place in Italy on September 18 at the Senate of the Republic and brought together people from religious and non-religious backgrounds, human rights activists, and academics from around Europe.

Being an LGBT person within a religious community can expose one to even further discrimination. This is the case for the two main monotheistic religions: Judaism and Islam. Being a member of a religious community is generally associated with the impossibility of living one’s sexual orientation and gender identity freely and openly. Throughout the event, however, the speakers who were introduced by Patrizio Gonnella, President of CILD, showed not only that this perspective is flawed, but that the active participation of LGBT communities can produce and reinforce dialogue between two different, though not isolated, religious communities.

As explained by Marco Serafino Fiammelli, the president of Magen David Keshet Italy, Jews and Muslims have found themselves supporting each other and fighting for shared religious values, in terms of ritual slaughter and the circumcision ceremony, which are threatened by European policy proposals. This shows how two religious communities could come together and work towards promoting inter-community issues such as the inclusion and integration of LGBT people.

Rabbi Lior Bar Ami and Islamic theologian Nassr Eddine Errami emphasised that the forms of oppression experienced by LGBT people are similar. Homophobia, biphobia, and transphobia, which are exacerbated and perpetuated in particular by conservative and orthodox Judaism and by far-right Islamists, have an impact on the perceptions of minorities, leading them to believe that people cannot reconcile two fundamental aspects of life: faith and sexual orientation and/or gender identity. The endeavours and the battles fought by LGBT movements within religious communities, however, remain largely unknown. As of now, almost all reformed Jewish movements have embraced LGBT people, and support groups that provide help and listening for homosexual, bisexual, and transgender Muslims are becoming increasingly prominent in Europe.

The integration of sexual and gender minorities is becoming more salient in light of the number of people who have applied for refugee status in Italy and Europe, as many of them have been persecuted for their sexual orientation and gender identity in their countries of origin. In this regard, persecution is usually associated with or stems from the belief that homosexuality cannot be reconciled with faith. The LGBT community can help change this perspective: starting from common experiences of oppression, the voice of LGBT people can mobilise common liberation dynamics within interreligious dialogue.

Jewish-Muslim dialogue on LGBT issues, however, is not limited to the religious representatives of the two communities. Laura Quercioli Mincer, a lay Jewish woman and a professor of Polish literature, pointed out that LGBT emancipation finds a fundamental push in the role played by laypersons, who are able to identify new routes within tradition. It is important to highlight that the fight for LGBT rights can only be strengthened by including women and other minority groups, thus recognising the intersectionality of rights and the importance of diversity within the LGBT community itself. Maryan Ismail, professor of the anthropology of immigration and President of Forum Musulmani Laici, called for recognition of the further discrimination experienced by Muslim lesbians, who are “guilty” not only of being part of a sexual minority, but also and above all of being women. Wajaht Abbas Kazmi, activist and founder of Allah Loves Equality, stressed that there are many homosexual Muslims, but that very few have come out publicly. This shows that it is important to work towards a freer and more tolerant environment that allows all men and women to live with dignity and respect of their personal identity, without feeling excluded from a community.

In a historic moment in which anti-Semitism, Islamophobia, and homophobia are increasingly widespread, the role that the LGBT community can play within the dialogue between religious and non-religious communities to oppose intolerance is central. Intolerance is also rooted within sexual and gender minorities and can only be halted through understanding difference.