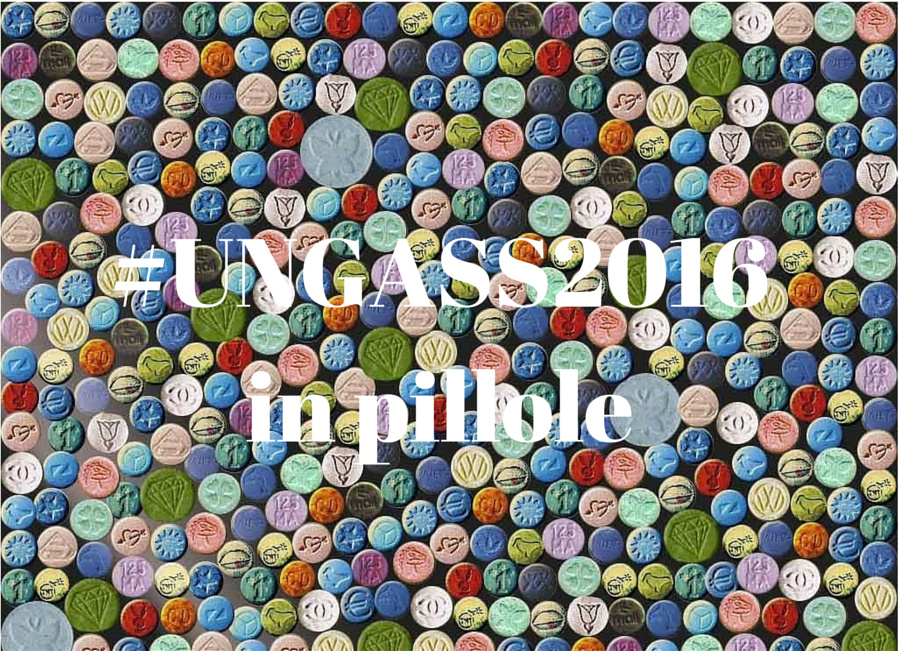 Everything you need to know about #UNGASS2016

The long-awaited Special Session of the General Assembly of the United Nations is coming up.

Through our Non Me La Spacci Giusta campaign, we have prepared for the event with a series of in-depth analyses: we discussed the intolerable costs of the war on drugs, focusing in particular on the tragic issue of capital executions; we talked at length with two experts on the subject, Steve Rolles (Senior Policy Advisor to the UK-based Transform foundation, which has been campaigning against prohibition for years) and Annie Machon (former British intelligence officer turned whistleblower to expose alleged criminality within the Service, currently European Director of LEAP, an association of law enforcement officers against prohibition), and we kept you up to date with our press reviews on drugs and related topics.

A few hours away from the official beginning of the Assembly, here is an essential explainer – originally published in the NMLSG blog on Medium Italia.

What exactly is #UNGASS2016, and why is it so important?

Here are 4 essential facts: What is a Special Session of the General Assembly of the United Nations, and what does it have to do with drugs? The General Assembly, made up of delegates from all 193 member states, is the main representative institutional organ of the United Nations, and the only one in which all member nations have equal representation and voting power. Therefore, it is obviously an important space of equal democratic debate in an organization like the UN, which has often been plagued by issues of representation.

The Assembly meets in regular yearly sessions from September to December; when necessary, it can reconvene or hold special and emergency sessions on issues of particular interest.

This is granted by Article 20 of the Charter of the United Nations itself, which states that special sessions can be convened by the Secretary General, at the request of the United Nations Security Council or a majority of UN members. To date, a total of 29 special sessions have been convened, but only on two occasions (in the early and the late Nineties) to discuss drug policies.

The long road to #UNGASS2016: what were the outcome of the first two Special Sessions on drugs, and why did it take so long before the third one?

At UNGASS 1990, the first Special Session on drugs, the main focus was to give impetus to the implementation of the 1988 UN Convention against the Illicit Traffic in Narcotic Drugs. To this end, the General Assembly adopted a Political Declaration on the importance of “protect[ing] mankind from the scourge of drug abuse and illicit trafficking”, and a subsequent Global Programme of Action in 100 points to be implemented over the course of ten years: the 1991-2000 period was indeed dubbed “the United Nations Decade against Drug Abuse”.

In particular, the Assembly expanded the mandate of the secretariat in Vienna for the implementation and the monitoring of the UN treaties on drugs: the Commission on Narcotic Drugs (CND) would then become the main governing body of the United Nations International Drug Control Program (UNDCP) and its subsequent “evolution”, the United Nations Office on Drugs and Crime (UNODC).

As a side note, it must be mentioned that for nearly twenty years, from 1991 to 2010, the UNDCP/UNODC was led by Italy: the first three Executive Directors were Giorgio Giacomelli, Pino Arlacchi and Antonio Maria Costa.

Once the institutional apparatus for drug control was put in place by the UN, the main focus at UNGASS 1998 was consolidation. There was no room for rethinking the prohibitionist approach: the official slogan chosen by then-director Pino Arlacchi (who was forced to resign in 2001 following harsh criticism and accusations of mismanagement) was “A drug-free world: we can do it!”. All the important issues, such as harm reduction, decriminalisation and the opportunity to reform treaties on drugs – were excluded from the agenda, not unlike what is happening now, as we will see later on.

In other words, even before the Special Session opened, it was clear to everyone that there would be no room for rethinking the UN approach to the world drug problem (“UNGASS 1998 A lost opportunity”). This, despite the fact that the very first UN World Drug Report, published in 1997 shortly before the opening of the Special Session, had already devoted an entire chapter to discussing the possible legalisation of drugs and the regulation of the market in light of the evidence that “resources spent on the war against drugs have been clearly mismanaged”.

Once again, the Assembly meetings led to the adoption of a Political Declaration and Plan of Action with the ambitious goal, among others, of eliminating or significantly reducing the illicit cultivation of opium poppy, coca bush and cannabis plants by 2019 (thus giving the impulse, in many countries where drugs were produced, to forced eradication with the use of military force).

The cracks in the UN system, however, were already showing, and the constant interference by the USA in the policies of the organisation was increasingly resented by the other member states and became reflected in public opinion itself. This is how the so-called “Vienna consensus” started to disintegrate: growing disillusionment with current policies was compounded by the failure to meet the 2008 objectives, which led to a call for a new approach based on harm reduction.

The indisputable breaking point came with the Political Declaration adopted at the UN meeting in 2009, within the framework of the annual CND Conference. A group of several countries (including Germany, the UK, Spain and Portugal) issued a separate declaration, reaffirming their commitment to applying strategies based on harm reduction. It was the end of the previously unanimous prohibition front.

Cracks and dissenting voices were followed by systemic collapse: by December 2012, the inadequacy of the legal and institutional framework for drug control had become so evident that the UN General Assembly decided to bring forward the next Special Session, originally scheduled for 2019, at the request of Mexico, Colombia and Guatemala (countries that have literally been devastated by the war on drugs).

It has been nearly twenty years since all member states of the United Nations last gathered to discuss drugs and, on that occasion, things did not go very well, as we have seen.

The last official stance of the General Assembly on drugs and drug policies, dating back to 1998, can only be described euphemistically as utopian: many years on, despite all the resources invested in this quixotic endeavour, the drug-free world invoked by Arlacchi remains a remote fantasy, and drugs are more popular, cheaper and more easily accessible than ever; the UN itself has acknowledged the global increase in illicit drug use. On the other hand, the war on drugs has led to rampant mass incarceration and capital executions and contributed to the spread of AIDS; allowed criminal and terrorist organisations to benefit financially from drug trafficking (as the UNODC itself has admitted!); and provided governments everywhere with a convenient excuse for impinging on our fundamental freedoms and civil rights (as Annie Machon eloquently explained to us in a recent interview, and the Alternative World Drug Report by Count the Costs very clearly showed).

All this has resulted in the collapse of the prohibition front, and led several countries to adopt alternative approaches based on decriminalisation – such as in Portugal, where drug use was depenalized as early as 2001 – or on legalisation and regulation (Switzerland’s radical experiment with prescription heroin and the legalisation of cannabis in the USA in the states of Colorado and Washington as well as in Uruguay). All these experiments have yielded great results in terms of harm reduction as well as significantly boosting the local economies.

Another significant change is that #UNGASS2016 will also involve actors outside the usual circle of UN drug agencies (which are still unwilling to abandon their staunch prohibitionist stance).

To be more precise, preliminary work also involved other organisms within the United Nations – from the Human Rights Committee to UNAIDS and UNDP – that have taken a clear stance against the war on drugs and called for the adoption of decriminalisation policies. In other words, consensus on the war on drugs is irrevocably broken at all levels, not only within the organisation, but within the UN itself.

What is more, attempts have been made for the first time to ensure actual participation from civil society by extending its representation at the event through the creation of a “Civil Society Task Force”. Of course, the issue of NGO involvement is far from being resolved, and it has posed a significant problem in the context of preliminary work: the opening document for UNGASS was negotiated entirely in Vienna, under the control of the CND, where representation of civil society is very limited (as Steve Rolles explained in a recent interview). Still, this is the first time the Special Session has welcomed more diverse input.

All of this has meant that there are great expectations surrounding #UNGASS2016 as a radical rethinking of drug policies.

On paper, it should be a success: the failure of the war on drugs is now undeniable, its unbearable human costs have been documented too well to be ignored; successful experiments with decriminalisation and legalisation are spreading around the world; even the United Nations has been taking stances against prohibition policies (see the letter recently penned by the Special Rapporteur on the Right to Health).

It is unlikely, however, that #UNGASS2016 itself will reform current policies on drugs in a significant manner. The outcome document produced by the CND as a stepping stone on the road to the Special Session is not especially promising, since it fails to mention the abolition of the death penalty for drug offences, and is also silent on the issue of harm reduction. Furthermore, it is highly unlikely that the text will be re-negotiated at the UNGASS.

In other words, as Steve Rolles told us ahead of the Assembly, it is not likely that #UNGASS2016 will result in significant changes from the status quo. However, we should not be too pessimistic, as the IDPC reports: the voices of those in favour of reforms are becoming stronger, and the Special Session is only one step of the way. It is essential to keep thinking long-term and to make the most of #UNGASS2016 as a valuable opportunity to attract global public attention to this issue.

Because we can and we must make a change in drug policies. In order not to miss any updates visit our website and subscribe to our newsletter!