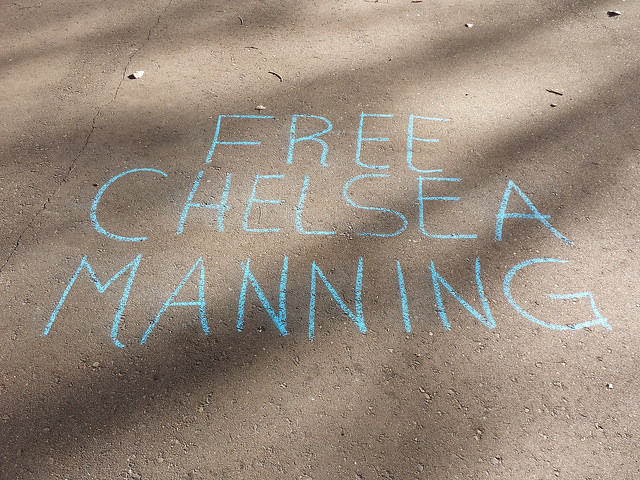 Saturday April 18th, CILD will host a panel at the International Journalism Festival focusing on Chelsea Manning and the role of whistleblowers in the public debate on privacy, security and surveillance.
To outline the issues, here is an introduction written by the moderator of the meeting, researcher and journalist Philip Di Salvo.

Five years ago Chelsea Manning was jailed for being the whistleblower behind some of the major leaks released by WikiLeaks starting from 2010.

Looking backwards to those scoops is like observing some of the most relevant turning points for contemporary journalism: thanks to Manning, 90k classified documents about the war in Afghanistan were revealed, together with 400k and more files on the Iraq war, more than 250k cables from the US diplomacy, 779 documents about Guantanamo detainees and the stunning “Collateral Murder” footage.

Those leaks are not only some of the most interesting examples of contemporary journalism, but also essential milestones to understand and comprehend some historical and recent global events. Five years after May 27th 2010, when she was arrested in Iraq, Chelsea Manning has never walked free. US authorities had originally charged Manning for 22 different felonies with a possible imprisonment time of more than 100 years for one reason only: being the source of journalistic revelations done in the public interest. Among other charges, Manning was also accused of “aiding the enemy”.
Jail didn’t mean trial thou, and Manning had to wait for more than 3 years for the trial to begin. During this time, Manning simply waited suffering the consequences of a Kafkian condition of abuse of power and neglect of democratic principles: for 11 months, for instance, Chelsea Manning was detained in “solitary confinement”, under condition the UN defined as “cruel and inhumane”.

Manning’s trial started only in June 2013, a few days before the NSA surveillance scandal exploded and Edward Snowden’s revelations broke the news, bringing back whistleblowing as a fundamental tool to denounce irregularities and governmental misconduct. Early in february 2013, Manning plead guilty to 10 lesser charges, confirming her role as WikiLeaks’ source.

Manning has defended her acts, declaring during trial to have acted to show “the real costs of war”. Sentence came during the summer: Manning has been convicted for 20 felonies, 5 of whom were espionage-related, but fortunately acquitted for “aiding the enemy”. Chelsea Manning was sentenced to 35 years of jail in total, with a credit for 3 years and a half “for time served in pretrial confinement and for the abusive treatment he endured in a Marine brig at Quantico”, as the Washington Post reported.

Manning’s story is emblematic for many reasons. The jail imposed to Manning explains clearly the dark climate surrounding whistleblowing and investigative journalism in the US, especially in these years under the Obama administrations. The self-presented “most transparent administration in history” has prosecuted under the 1917 Espionage Act more whitleblowers than all the previous administration combined. Often comparing acts of journalism to acts of espionage, treason or even terrorism.

The Manning case reminds also how much people like Julian Assange, Edward Snowden, Jeremy Hammond, James Risen, Barrett Brown and John Kiriakou are intrinsically connected by the consequences of national security overtaking other fundamental principles of democracy, free press included. No-one responsible for the war crimes exposed by Chelsea Manning is facing consequences. The only prosecuted individual has been the whistleblower.

There’s been little debate about the Manning trial too. In 2014 Project Censored ranked it as the most censored news of the year in its own annual publication. It is important to remind how the Manning trial took place in a de-facto secrecy climate, lacking the proper transparency such a big case should require.

Five year after Chelsea Manning’s arrest, it is time to sum up. The case will be discussed at the International Journalism Festival in Perugia together with some experts and journalists involved in the Manning case and in those of other whistleblowers.

On Saturday April 18th, 9.30AM, in the Sala Raffaello of the Hotel Brufani di Perugia, Ben Wizner, Director of the ACLU Speech, Privacy & Technology Project and Edward Snowden’s  legal consuelor, Annie Machon of the Law Enforcement Against Prohibition, journalist Alexa O’Brien, Antonella Napolitano of Coalizione Italiana per le Libertà e i Diritti civili and Philip Di Salvo, researcher and journalist, will discuss these themes at the “Manning and the others: traitors, spies or heroes? Media reporting and whistleblowers” panel.