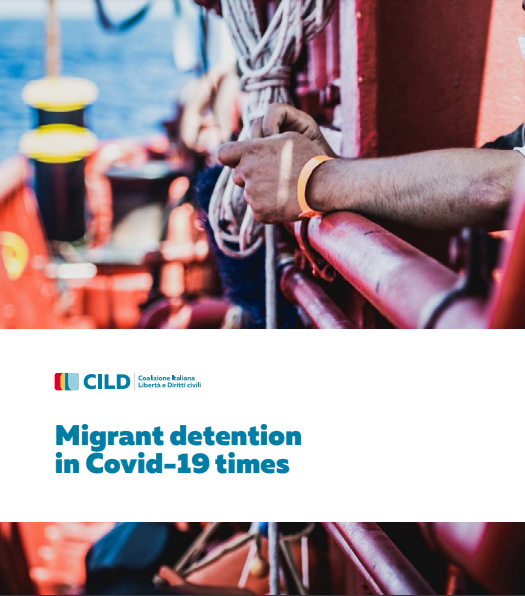 A snapshot of immigration detention in the days of Covid-19. This is what the Italian Coalition for Civil Liberties and Rights (Coalizione Italiana per le Libertà e i Diritti Civili, CILD) has set out to achieve with its dossier “Migrant detention in Covid-19 times“. Based on data collected between February and June 2020, it analyses developments regarding arrivals by sea, detention in centres for repatriation (Centri di permanenza per i rimpatri, CPRs), in hotspots and in ad hoc facilities, and the establishment of ship-based quarantine.  Among the numerous places of migrants’ detention in the country, during the health emergency, these were the ones that were mostly employed, also due to the substantial closure of land borders.

On 2 July 2020, as the dossier was being finalised, there were 451 people in the hotspots, 332 in the CPRs, 207 on the Moby Zazà ship and an indefinite number, due to lack of data on the matter, in ad hoc structures that were opened during the health emergency in Sicily for the quarantine of those arriving on Italian coasts.  These facilities, along with hotspots, have become temporary places of quarantine and restriction of personal liberty – or at least of movement –  in the absence of a judicial decision and in potential conflict with Article 5 of the European Convention on Human Rights for reasons similar to those established by the European Court of Human Rights in the judgment Khlaifia v. Italy.

The dossier also looks at the CPRs, where the detention of foreigners awaiting repatriation can last up to 180 days (or even a year in exceptional cases of asylum seekers detention) and where new entries continued to occur despite the blockade of expulsions.

A focus is then dedicated to the ship-based quarantine introduced after the so-called “Closed Ports Decree” of 7 March 2020. The latter established that during the whole period of the health emergency Italian ports cannot be considered as Place of Safety for foreign ships that carried out operations outside the Italian SAR area. Two ships were hence identified, first the Raffaele Rubattino and then the Moby Zazà. They became floating hotspots off the coast of Palermo and Porto Empedocle respectively, holding people who disembarked from foreign vessels or who arrived independently on the Sicilian coast.

Upon analysing the evolution of the situation in these places of detention, CILD found a series of shortcomings.

First, the drafting of this report encountered difficulties in finding information. While it is possible to have daily updates on arrivals by sea through the dashboard of the Ministry of the Interior, there is no official publication on arrival data in the many places carrying out administrative detention of foreigners. In this context, the initiative of the National Guarantor for the rights of persons detained or deprived of personal freedom in publishing 35 periodical bulletins, in the health emergency phase, providing data, numbers, information and recommendations related (also) to the administrative detention of foreigners was an excellent resource. However, CILD considers it useful and necessary to have publications of statistics with a predetermined periodic frequency, as is the case for detention in prison on the website of the Ministry of Justice.

Second, there continues to be a lack of judicial control over the legitimacy of detention in hotspots. As emerges from the dossier and other authoritative sources, in fact, the detention in hotspots and ad hoc structures continues to be implemented in Italy in the absence of a legal basis, i.e. a measure from a judge ordering or confirming the detention in these places. Therefore, the Italian Government is still not implementing the Khlaifia judgment, by which the European Court of Human Rights condemned Italy for the detention without the intervention of a judge and without a legal basis suffered by some Tunisian citizens in 2011.

Third, detention in CPRs is to be considered without legal basis during the Covid-19 emergency period, since international mobility and therefore the possibility of repatriation has been suspended. It should be recalled, once again, that detention in CPRs is supposed to be exclusively preparatory to repatriation and if this is not possible, any detention is considered illegitimate. The Italian Government has therefore chosen not to empty the centres completely, despite the fact that administrative detention should be finalised noting the impossibility of repatriation in current conditions.  At the time of finalising this report (2 July) there were no reports of any repatriations being carried out or when it will be possible to resume such activity, for that matter. Additionally, the recent Relaunch Decree, in introducing regularisation measures, ordered the suspension of expulsion procedures until August 15 (the deadline for the submission of the request for regularisation following the extension provided by Decree-Law no. 52 of June 16, 2020). Ultimately, beyond the emergency, CILD believes that the time has come to seriously question the appropriateness of detention in CPRs, given its objective substantial failure in terms of effectiveness and violation of fundamental rights of detainees. Encouraging alternatives to detention, as requested by the International Detention Coalition and the EU itself, seems to be the only remedy to ensure greater legality, public safety and security of the rights of the recipients of removal measures.

Fourth, ship-based quarantine measures must take into account the experiences of those who land on our shores after a troubled journey, fleeing from situations of torture, severe exploitation or great poverty. While we hope that quarantine will be carried out on land, in the exceptional case of quarantine on ships, as also was noted by the National Guarantor, it should at least be guaranteed that: medical isolation on the vessel is proportionate, non-discriminatory and non-arbitrary; the duration of the measure is limited and defined by scientific evidence; the condition of the vessel respects human dignity; vulnerable persons are accommodated (e.g. those in need of medical treatment or those who have been victims of torture) and have an immediate possibility to be evacuated and receive assistance in appropriate facilities on land; all persons on board have access to information on their rights and can make an application for international protection during quarantine; and all persons on board are informed as soon as possible of where they will be transferred once quarantine has ended.

This being the case, since the contract for the ship Moby Zazà has now been completed (since June 14), and given the high cost of the same contract (about one million for one month), the hope is that the quarantine ship will not become a floating hotspot indefinitely and future quarantine measures for new arrivals will be executed on land. The risk that this mode (quarantine aboard a ship) moves from being an exception to becoming the norm, and therefore discontinuous, discriminatory and unjustified practices will be cemented. We need only look at the extension in place for the ship Moby Zazà and what happened with hotspots introduced in 2015 as an exception which then become an institutional place to detain those who land without a formal title to enter Italy, as examples of this risk.

Finally, reflection is required with respect to the closure of ports and the Italian and European participation in the Libyan SAR in operations that seem to give rise to collective rejections redirected to Libya. If what is stated in the Remote Control report is true, where we read of the use of European aircrafts (on at least 80 occasions) to facilitate the interception and return to detention centres in Libya of those who fled from those same centres as human rights are not respected there, there is a clear violation of the law of the sea, which requires disembarkation in a safe place, which obviously cannot be Libya in the above scenario. Civil society must state clearly that the principle of non-refoulement must also be respected in international waters and Italian and European military forces, like Italian and European contributions to cooperation, cannot be invested to facilitate actions contrary to the law of the sea and the principle of non-refoulement.

Ultimately, the epidemiological crisis we are experiencing must impose a reflection on civil society, the Italian Government, other European countries and the EU that starts with a critical review of current migration policies based on the combination of outsourcing and widespread detention of migrants. The failure of current migration policies, in terms of human lives disappearing in the Mediterranean or returning to Libyan hell, of widespread illegality of administrative detention, is visible before everyone’s eyes and during the health emergency critically broken aspects of this security approach have only been amplified. The return to normality, which we all hope for, risks giving us back a “lesser” normality, even more devoid of rights and guarantees in the specific field of migrant detention if there is no change of course now. In fact, the exponential increases in CPR attendance figures at the beginning of July, and in hotspots without a legal basis, are worrying. There is concern about the proliferation of detention centres that escape any form of monitoring and control, the protraction of activities (initially planned for only one month) of the quarantine ships, the protraction of the closure of Italian ports.

Without prejudice to the need for a critical review of current migration policies, administrative detention, regardless of the name given to the various existing administrative prisons, should be conducted on the tracks of positive recognition of fundamental rights, starting with the introduction of legislation which clearly recognises the rights of detained persons and judicial remedies so that these rights are not just mere statements, or rights only on paper.