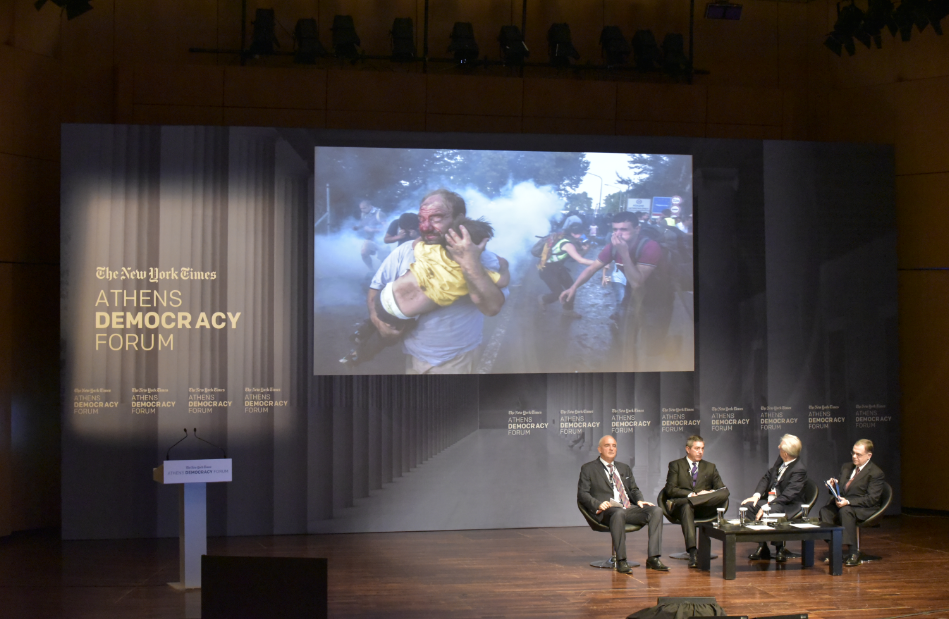 Democracy is a process, not something that is accomplished or achieved, op-ed writer Serge Schemann noted in the New York Times during the fourth edition of the Athens Democracy Forum, an event that brought together politicians, thinkers, economic players and spiritual leaders.

Furthermore, democracy is not irreversible: we see this every day, faced as we are with vast political and social phenomena, in the shortsighted responses from many politicians who choose to take advantage of popular fears and insecurities rather than devise long-term solutions.

Inevitably, the panel opened with migration, the issue that has had the greatest impact on public opinion and governments, as well as sparking a global debate.

What to do when hundreds of thousands of people fleeing poverty and war arrive at our doorstep? Can we open our doors to everyone? This was the opening question at the panel on migration, a conversation between the E.U. Special Representative for Human Rights Stavros Lambrinidis, former prime minister of Greece Lucas Papademos and former prime minister of Italy Mario Monti.

Migration is an everyday challenge to Western democracy as well as a test for the values we believed to be its bedrock following World War II and the fall of the Berlin Wall. Comparisons were drawn between countries which have opened their doors to migrants, like Germany, and those that have chosen to close them, like Hungary, where citizens are about to vote whether to accept the EU’s proposed mandatory quotas for relocating migrants.

Public discourse remains deeply polarized, and reactions reflect a change in democracy towards political and social debate that is constantly focused only on the short term, former Italian prime minister Mario Monti observed; after all, we live in a time of the 140-character Tweet and 10-second soundbites, he said (Monti has a Twitter account too, where, however, he only shares his TV appearances and comments given in the press).

And while the media depict politics as founded on sensational approval and attention-grabbing statements, politicians, in turn, are adjusting to the media landscape, becoming louder and louder to make their voices heard above the background noise: a vicious circle where attention is constantly focused on the next election campaign, the next poll, the next divisive issue that demands taking a side.

Increasingly, populist and racist forces are being embodied by the “Big Man” (the subject of another panel at the conference), the politician who ostensibly acts in the interest of citizens against the “political correctness” of the “softies”, rehashing old us-and-them rhetoric and demanding blind trust from voters but without offering any concrete solution in turn. These politicians are not considering the future, Papademos noted, citing the long-term benefits of integrating immigrants into the job market, especially in aging countries with stagnating economies (there is plenty of data available on the subject in Italy).

The search for “sustainable” security

There is, however, little room for this line of thinking in times of terrorist attacks when citizens are demanding answers, host and op-ed columnist for the New York Times Roger Cohen countered. How do you respond when security is used as an argument against welcoming immigrants?

Highlighting the importance of protecting human rights, Lambrinidis reflected on the possible evolution of the debate on security: we should start thinking in terms of “sustainable security” as just a few years ago we did with the concept of development. It was an important step for development policies, the EU Special Representative for Human Rights explained, because it made clear that certain actions taken in the name of development could damage the environment and create further economic inequalities.

Lambrinidis then wondered: can we really have “sustainable” security when thousands of youth are arrested in Egypt during demonstrations and then imprisoned simply because of their religion, with no proof that they pose an actual threat to society? Are we not going to ultimately radicalise them? Are we not undermining our own judicial system and the safeguards set forth by the law, which we, as States, need in the long term to be stable and successful?

A seat in the government or a place in history?

Pressure from mass migration and historical and political developments can threaten the cohesion and the very future of Europe, said Papademos, who is “quite worried”: the EU is facing a number of crisis simultaneously, and there are high levels of inequality within European countries. It will be very important to address the short-term economic concerns of people over the rising levels of unemployment to make sure they do not overshadow the long-term benefits of immigration. Improved cooperation across Europe will also be vital, the former prime minister of Greece added, so that the burden does not fall disproportionately on certain countries. Enhancing fiscal and economic integration, which will require a democratic debate, will also be crucial, he concluded.

“Did Angela Merkel do the right thing in welcoming refugees?” Roger Cohen asked Monti before inquiring what advice he would give the German chancellor. Monti replied with another example from the same country: “Helmut Kohl is remembered in European history as the person who put in place the euro. […] For doing that, […] in 1998, he lost the election to Gerhard Schröder.”

The dilemma, then, is between a seat in the next government and a place in history. Is this the choice facing European leaders in the future?