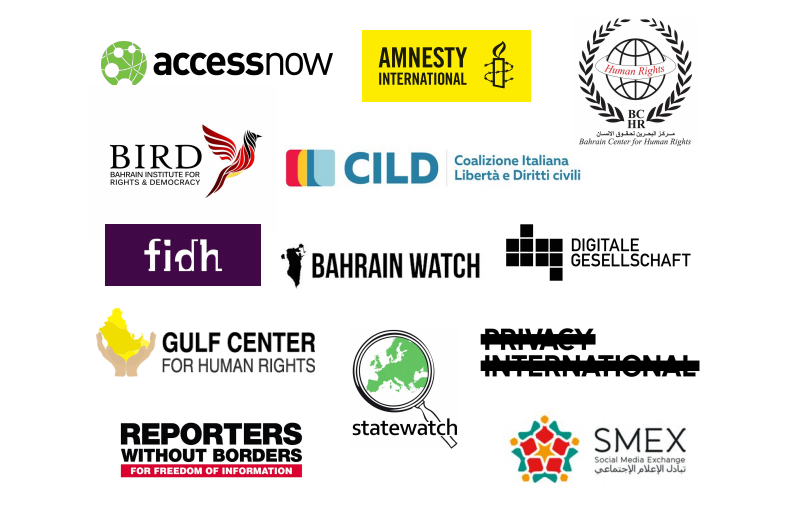 Following the alarming evidence that EU-made electronic surveillance equipment is still being exported to authoritarian countries around the world, we strongly urge all EU member states and institutions to respect their human rights obligations and call on them to prioritise long overdue EU reforms.

We are extremely concerned that little has changed since civil society first recognised the need to modernise current EU rules governing the export of surveillance equipment as far back as 2011 during the Arab Awakening. As the European Commission has since proposed reforms to the current system specifically aimed “to prevent human rights violations associated with certain cyber-surveillance technologies”, we urge member states to refrain from any further delays in the process and to ensure that states throughout the European Union prevent surveillance exports that pose risks to human rights.

The export of electronic surveillance equipment to agencies involved in human rights abuses and to countries lacking sufficient legal frameworks to protect privacy poses a serious risk to the EU’s interests in human rights, democratisation, and rule of law. In Macedonia, where numerous EU member states and institutions have spent years and considerable resources to make progress in these areas, there have been reportedly some 20,000 people subject to wiretapping over several years, including activists, members of the judiciary, opposition members, and diplomats. This effectively undermines many EU initiatives by allowing the former ruling party direct access to telecommunications surveillance systems. Recently, reports have shown how authorities in Mexico, the United Arab Emirates, and Bahrain have used surveillance powers nominally targeting criminals and terrorists against human rights defenders, activists, lawyers, and others.

As a result, we urge that the export control framework be updated. We recommend that:

A mechanism to update the EU control list should be agreed, which will decide on updates to the EU control list in a transparent and consultative manner, taking into account the expertise of all stakeholders, including civil society, and international human rights law.

Greater transparency in export licensing data is needed. Such transparency is crucial in enabling parliaments, civil society, industry, and the broader public – both in the EU and in recipient countries – to meaningfully scrutinise the human rights impact of the trade in dual-use items.

To reinforce the protection of research as stated in the preamble, the new regulation should include clear and enforceable safeguards for the export of information and communication technology used for legitimate purposes and internet security research.

More information can be found here.

Member states are failing to properly assess their human rights obligations when it comes to assessing export licenses and are interpreting their current obligations differently. It is essential that strong export assessment criteria are agreed and uniformly applied.

The current criteria are inadequate. For example, Denmark and the UK have both approved export licenses for surveillance equipment to the UAE, where electronic surveillance is proven to be targeting human rights defenders and whose forces are torturing people in secret detention facilities, according to the Associated Press. The Netherlands in contrast has denied an application to the UAE reportedly based on human rights considerations.

Similarly, member states have been approving export licenses to Egypt, where security forces have routinely tortured detainees and forcibly disappeared hundreds of people, and where the government has recently taken unprecedented steps to criminalise human rights and independent groups. In 2013 member states in the Council of the European Union expressed “great concern” following “an unacceptable large number” of deaths and injuries at the hands of Egyptian security forces, and agreed “to suspend export licenses to Egypt of any equipment which might be used for internal repression and to reassess existing export licences”. Following the subsequent murder and torture of Italian student Giulio Regeni and “a large-scale campaign of arbitrary detention of critics of the government, including journalists, human rights defenders, and members of political and social movements”, the European parliament called “for exports of surveillance equipment to be suspended when there is evidence that such equipment would be used for human rights violations”.

Despite this, this week French media revealed that a company has been exporting internet surveillance equipment to Egypt. Similarly, the UK has approved the export of telecommunications interception equipment as well as satellite phone interception systems to Egypt.

In 2016, the Italian Ministry of Economic Development also approved an export license for internet surveillance systems to the Technical Research Department in Egypt, a secret unit of the Egyptian intelligence infrastructure which has previously purchased surveillance equipment from a range of other EU-based companies. After first approving the license, the Italian Ministry of Economic Development have since confirmed that they have revoked the export license following media reports that the company in question was under investigation and letters from NGOs urging the Ministry to reconsider their assessment.

As a result of the Italian Ministry’s decision and in order to maintain consistent application throughout the Union, it is now essential that other EU member states, including France and the UK, also review their extant export licenses for surveillance equipment to Egypt and revoke them where there is evidence that it poses a risk to human rights.

In 2011, as evidence was emerging during the Arab Awakening that authoritarian regimes across the Middle East and North Africa were relying on European-made surveillance technology, the Commission released a Green Paper recognising the need to update the Dual Use Regulation to reflect advances in technology and early in 2013 first recognised stakeholders’ desire to bring the “use of ICT interception and monitoring items or ‘cybertools’” into the scope of the Regulation.

The Commission eventually released a subsequent proposal to modernise the EU export control infrastructure in September 2016. While the proposal offers some improvements on the current regime, it requires significant further changes to ensure it lives up to its potential of protecting human rights.

Amendments to the proposal are currently up for discussion within the Committee on International Trade of the European Parliament, members of which have proposed some positive amendments to the proposal. After amendments are agreed within the Committee, they will be put to a vote in the European Parliament, possibly in September 2018. After a vote, the proposed amendments will be discussed between the Commission, Parliament, and member states in secret “trialogue” meetings aimed at reaching a compromise position, likely to be in 2018. If Parliament subsequently does not vote in favour of the agreed amendments however, the trialogue process continues until a position can be agreed; a process which can take years. Once the member states and Parliament agree to the amendments, they will become binding across the European Union.