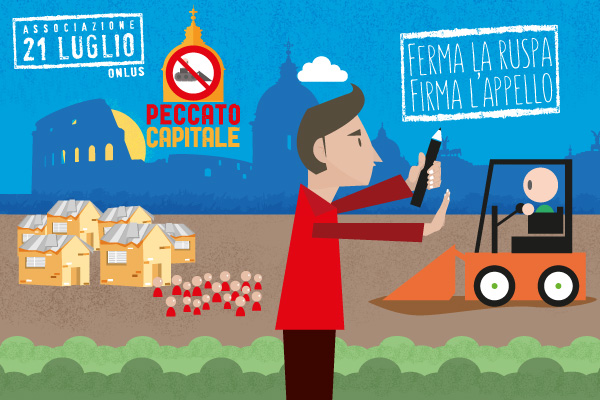 Ever since Pope Francis announced the Extraordinary Jubilee of Mercy on March 13, 2015, forced evictions of Roma communities in the capital, in violation of international laws and the human rights of the families involved, have more than tripled.

This morning, on World Habitat Day, Associazione 21 luglio launched an international petition called #PeccatoCapitale [Capital Sin] asking the City of Rome for a moratorium on forced evictions during the Jubilee year.

Monsignor Augusto Paolo Lojudice, auxiliary bishop of the Diocese of Rome, and Father Alex Zanotelli, a member of the Combonian missionaries, also attended the press conference.

From the time Pope Francis announced the Extraordinary Jubilee of Mercy, authorities in Rome have carried out 64 forced evictions, going from an average of 2.8 operations per month in the three months preceding the announcement (January 1-March 13, 2015) to a monthly average of 9.9 from March 13 to September 30, 2015. During the same time frame in 2014, the monthly average was just slightly above 3 evictions.

“We are very concerned by the sharp increase in forced evictions that we have been witnessing daily since the Jubilee was announced,” the President of Associazione 21 luglio, Carlo Stasolla, said. “The evictions being carried out in Rome are illegal, as they do not comply with the procedural protections set by international human rights standards, and they represent a gross violation of the human rights of men, women and especially children. Furthermore, they represent a useless waste of public resources; people are simply moved from one end of the city to the other, which does not solve the housing problem and only exacerbates the vulnerability of those affected. The administration’s response is always based on an emergency type of approach rather than a socially inclusive vision.”

In the absence of a proper response from the administration, Associazione 21 luglio has launched the international petition #PeccatoCapitale in order to raise awareness among Italian citizens as well as those visitors and pilgrims who will be travelling to Rome over the coming months.

Through only a few clicks on the relevant web page (also available in English), users can sign the petition asking Mayor Marino, Prefect Gabrielli and Councillor for Social Policy Danese for a moratorium on forced evictions during the Jubilee of Mercy, and to urgently initiate a dialogue to explore possible alternatives to forced evictions in line with the protection of human rights.