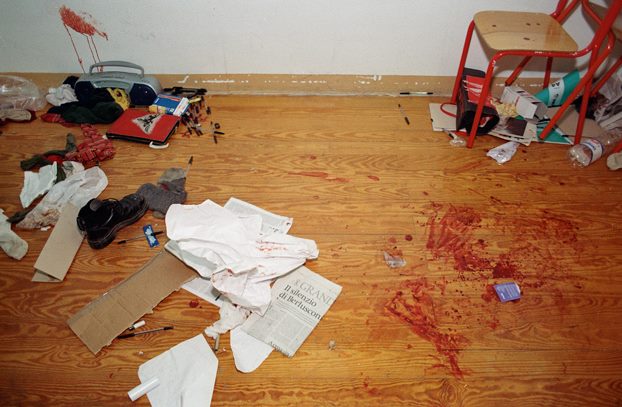 “The police raid on the Diaz school was torture.”

Fourteen years after the events in Genoa, the European Court of Human Rights has condemned Italy for torture at the Diaz school during the Group of Eight Summit. The judges ruled that Italy violated Article 3 of the European Convention on Human Rights, which forbids torture and inhuman or degrading treatment.

The court also found that our country still lacks appropriate legislation to punish these crimes.

An op-ed by Patrizio Gonnella, president of CILD and Associazione Antigone.

There is justice in Europe. Not in Italy.

Fourteen years after the police brutality at the Diaz school, the European Court of Human rights has found Italy guilty of torture.

As the Supreme Court of Cassation had already made clear, you cannot punish torture in Italy because there is no such criminal offence.

The judges in Strasbourg have therefore condemned our country for violating Article 3, which forbids torture and any inhuman or degrading treatment, but also because, lacking appropriate measures in the penal code, acts of torture in Italy go unpunished.

Over the coming days, the Chamber of Deputies will be discussing a draft law, which the Senate approved several months ago.

It is not the best draft. It is inconsistent with the UN provisions, when translating ten lines from English into Italian would have sufficed.

At the Diaz school, as well as in the illegal detention facility in Bolzaneto, the police thought they could make exceptions to the rule of law.

The film Diaz – Don’t Clean Up This Blood by Daniele Vicari must be credited for bringing this story to many of today’s young people who were little more than children in 2001. It is the story of a national shame. Of a State that was never a plaintiff in the cases of Diaz and Bolzaneto in Genoa, nor in the case of prison brutality in Asti, the case of Stefano Cucchi’s death in Rome, the Aldrovandi case in Ferrara, the Saturno case in Lecce and so forth.

There is more. Many of the defendants in these criminal proceedings have received promotions, and very few have been disciplined at all.

It is a devastating message, an unequivocal message that validates and incentivizes the illegal practice of torture. A message that also marks the disproportion between the irrepressible powers of retribution and any naive longing for democratic legality.

If this – public solidarity or impunity for torturers – is the reaction from our highest institutions, then it cannot be reasonably and correctly argued that torture is an issue of a few rotten apples.

Torture is never an issue of rotten apples as long as impunity is pervasive, from the single police officer all the way up to the highest public offices.

Torture and torturers creep in wherever they find space and fertile ground, wherever the system allows them to exist. Torture is possible when it encounters no resistance from the institutions, no opposition, no sanctions, no public scrutiny.

Fighting torture requires not only the introduction of a criminal offence of torture that is not subject to the statute of limitations, but also a State administration that is willing to prosecute the alleged torturers at all levels.

It also requires a police force whose work is not inspired by machismo, but by social prevention. Lastly, it requires the abandonment of the esprit de corps and the decommissioning of special forces.

Even the most heinous crimes must be defeated within a legal framework, using the proper lawful means.